For Felipe’s brother Victor, fishing is deep play, and going to the river an obsession. Victor would be described in English as an avid sportsman. I don’t feel the name does him justice. His knowledge of the mountain and reverence for his prey, be it deer, fish, or bees wild mountain honey has been accrued by a life of observation. He sees on a deeper level than other hunters I have known. He does not wear camouflage clothing, or use fake deer scent. He makes his own weapons. His method is not thought based; it is action that flows in conjunction with nature. Perhaps mountain man is more apropos, more like Eustace Conway, minus the mission and self-promotion.

Victor does not hunt or gather except for consumption. Perhaps he had a similar experience to Felipe who, as all boys in this community, had a resorte (slingshot) as a child. Boys here make pocket money for refrescos (soda pop) hunting iguanas; they are considered a delicacy by city folk. When Felipe was five he killed his first bird and was so proud he gave to his mother, she was furious when she saw it. She barked at him, “If you ever bring me this kind of bird again you will eat it for supper, don’t ever bring me anything you are not prepared to eat.”

Felipe had charmed me with stories of going to the river when we were living in the US. I reveled in his memories of the whole family, getting up before dawn, packing food and laundry on burros to spend the entire day in transit, play, and work, the elder children watching the younger. His disdain for lifeguards and regulations of all kinds infused the story with a sexy revolutionary fervor.

Rio season begins in February. During the summer rains, the river is too unpredictable to swim, in the winter it is too cold. But when the real heat comes in February thru May it is low and cool and an elixir to the soul. Felipe was excited to go, and so was I during our first hot season in Mexico, though as it turned out, my infatuation with the river was not love at first sight.

We set out with Victor and his wife Carmella in the back of pickup loaded down with people, fishing and cooking equipment, groceries, and toiletries. The river is accessed thru a field of irrigated sugarcane and is so deep into nowhere that the sensation of remote is notable even if you “live in the sticks” as we do.

Felipe did not tell me that it is a segregated event. The men disappear for hours with their nets and harpoons and the women are left to well… do nothing but wait for their return. At that time my Spanish was negligible and to be alone with people that spoke no English for 6 hours was intimidating. I told myself at the time my discomfort was due to my indignation about the primitive hunter gatherer mentality, a tiny bit of self-deception.

The first trip was hard, I felt self-conscious, abandoned and justified in my annoyance about the rampant sexism. On top of everything else, the women were expected to clean and gut the fish, usually 20 or more. I took on the gutting position. Carmella scaled and sliced open the belly and Yuli, her daughter-in-law and I ripped the guts and gills from the often still-thrashing fish. I was horrified, but my Midwestern nature would never have allowed me not to help. Thankfully, I had lived in Mexico long enough by this time that I had learned to question my reactions and wait to see how I felt about it after another visit. 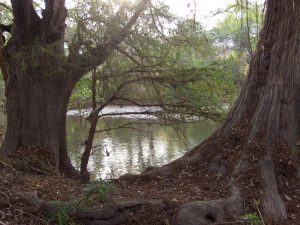 I returned; the allure of the place was undeniable. There is a tree that grows by the river, El Sabino, it is Mexico’s national tree and goes by many names; ahueheute in Nahuatl, the bald cypress, the weeping pine. It is huge and hairy; I am in love with them. Their tiny, eyelash like leaves form a delicate bed within the hollows of their roots. In my mind they are like the crown of an ancient redwood. They have a propensity to die in part and renew themselves, leaving massive trunks below with hollows large enough to dwell in, and indeed they are used to hide the possessions of those who come and go to the river for food, and to bathe.

I have been to the river many times, and have enjoyed it in countless ways, though I must admit I haven’t learned to fish. When I figured out that the mens job meant being in the cold deep parts of the river for several hours and harpooning fish to death under water, gutting became more appealing.

Once, Carmella invited us to the river and I declined explaining, “I have so much work to do, I can’t go”. My unexpectedly philosophical brother in law replied, speaking like Bodhisattva, “The work is never finished, come to the river.”

The last time I went to the river, I relished the time alone with women. I suggested to their amusement, that we should have t-shirts made that said TEAM TRIPA (guts). We bathed and the water was glorious, and I was the only one that remembered toilet paper, shampoo and soap, though I promptly lost it diving.