Two weeks after Felipe slipped Edith’s eggs under a sitting hen, he heard her telltale purr. The eggs were hatching. This is one of Felipe’s skills that fascinate me, he understands chickenspeak. Felipe’s first job, at 7 yrs. old was to feed his mother’s chickens. I assumed that he learned to recognize their varied communicative clucking indicating; she’s laid an egg, she is sitting, there’s a predator, or her eggs are hatching, as a child. But he tells me no, he’s learned that since we have been here. Why haven’t I learned that? Because he is more observant that I am, and this, he believes is because he was not taught how to do things. When he was given a task as a child no one would explain how you do it. They simply said, do it. He had to watch and listen to learn. Fortunately, I have him to teach me.

When he told me I may have more ducks, I leap from the couch and raced to the hens’ nest. Hens are mean when they have babies, so I knew getting a look at the new arrivals was going to entail a few harsh pecks and possibly a really ticked off chicken flying at my head, but I had to see. I gently pushed her back, as she tore at my wrist with her sharp beak, to reveal three ducklings!!! Within two days there were three more.

I gently broke open all of the eggs that had not hatched to be certain there were no live ducklings before I threw them out. I saved one more duck in this way; I kept her in the house on a heating pad for a day until she was strong enough to join the others.

This is the first time I have had a hen mothering ducks, and it is a little problematic because they have different behaviors. Hens and chicks cover a lot of ground even when the chicks are just a day or two old. Ducks like to sit around and play in the water. They are not built for hiking. I have resorted to tying the hen up so that she cannot drag them through the forest where they will surely be lost, but having a hen for a mother could be very advantageous for them. I have seen hens fight with raptors and win, to protect their young. I lost three of the  flock I mothered to hawks; they will probably fare better with her. 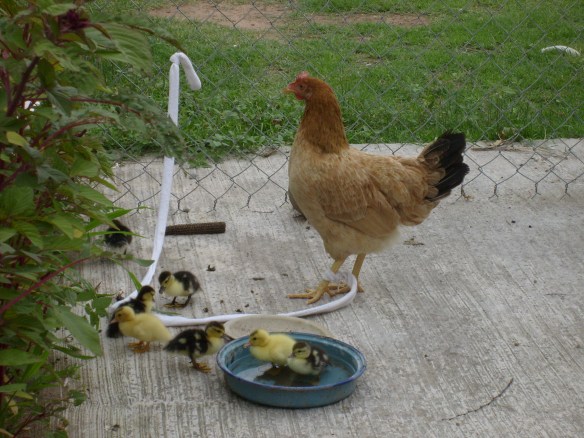 As usual, I don’t really have any idea what I am doing; like, how to accommodate their different natures, or when or if I will ‘ween’ them from the hen. I know I’m anthropomorphizing, but the hen looks really perplexed when her ‘chicks’ plop into the water pan, and that they are not picking up her queues for beak sharpening and dirt scratching. I can’t imagine what she’ll do when they actually take flight. In the evenings she goes to bed at the appointed chicken bedtime, sundown, in their Quonset hut I made for them out of half of a culvert tile. The ducklings stay up until dark as she clucks and coos in hope of wooing them into the nest. With this flock I’ve decided to train them to go to bed and be enclosed overnight, to outfox the fox. After they toddle into the nest at almost 9 o’clock I cover the entry with a grill grate.

Even though I don’t have a plan and I failed miserably with my last flock, I am thrilled to have another chance at raising ducks. Ducklings are adorable, ducks are charming and useful, and Gerald is in need of a flock. Wish me luck!