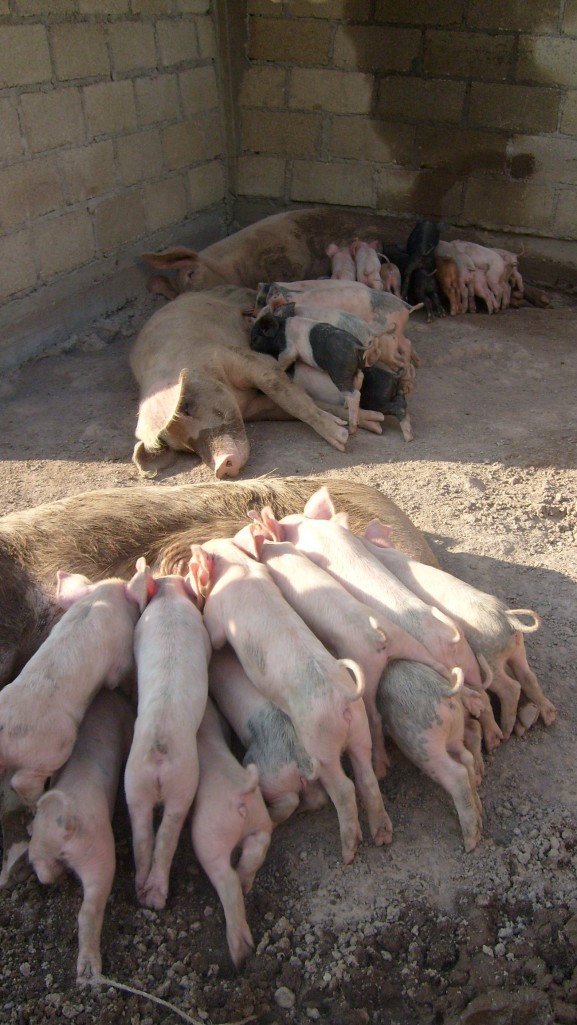 About a year ago, after six years of consecutive joint and individual failures to make a reasonable living Felipe and I made an agreement. I said,
“If you think you can make a living raising animals, I will stay out of your way with my anthropomorphizing, and devote myself to writing this book I am fantasizing will sell millions of copies.”
He said “Great!”
His enthusiasm was mostly due to the relief of not having me poking my nose into every aspect of his farming: crying when we sold animals, insisting on yards so large it made it difficult to fatten, speculating on his sows moods… Shortly after my pledge he came up with a business plan to keep eight sows for breeding, and consistently market ten pigs a month.
We introduced Empire in May of 2o12 and Don Juan in December, since then he has grown his brood to eight sows. Four have already birthed, and we have two more litters coming this month. Bringing us to a whopping fifty pigs at present.

The reaction of La Tigrains to his hoard has been consistent.
“You are crazy! Forty piglets and two litters yet to come! That’s too many, you will never sell them. Hogs are down, everybody knows that, you’ll never make money.”
We’re accustomed to such nay-saying . It is a part of the community’s character. Are we immune? It seems so, or we probably would have packed up long ago.
An interesting aspect of his system is; he utilizes native plants for protein supplements. Protein is the most expensive part of a pig’s diet and he has saved a lot of cash and increased his profit margin by using ground cubata pods as a protein source. He is also experimenting with parota seed which must be toasted and ground to be edible. The best part is that he hired local kids to the pods collect for him. It’s great to see them excited about doing something a little radical (no one else is interested in these campo food sources) for their own prosperity.
Felipe has been building rooms for his sows on Sundays after he puts in his 60 hour week. The sows seem very pleased with them (whoops– mood speculation). They weathered the first rains with ample dry space and they have a nice mud bath! Also, we have lost only one piglet to crushing as opposed to the three Empire smooshed last time due to insufficient space.
In the afternoons I give them their lunch and a shower. The piglets are already fighting each other and rolling around in the food. There is much squealing, mud digging and play; pig happiness. Imagine! Felipe managed to raise happy, healthy marketable pigs all by himself.