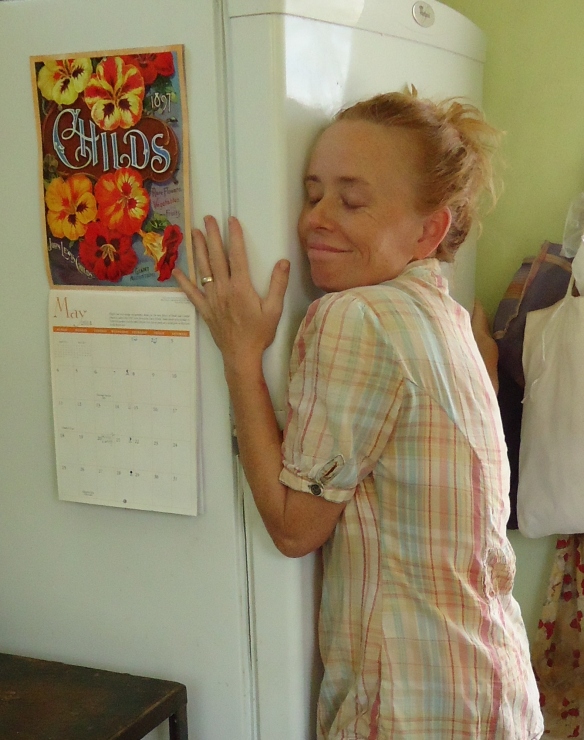 I started this blog with the intent of offering practical advice about living simply, and I wrote some informative posts: how to make a tortilla, how to eat a live bug , kill a chicken, or drink iguana blood( in coke! Who would have guessed?).  Then I realized they weren’t very practical bits of information for most.
But, there is something I’m quite seasoned at that could come in handy for almost anyone, even if only for camping—living without refrigeration. So this is a little post about what to do if you have to live without your refrigerator for a few days, weeks …or as we have been, reluctantly “off the grid” for months at a time.

Place casserole dishes under all of your frozen foods, and transfer perishables (unfrozen meats and dairy) to the freezer. Place a small towel in the bottom shelf to absorb moisture. Depending on how much frozen food you have and how infrequently you open the door, perishables will last for a couple of days.

Step Two:
After it’s certain you won’t have electricity for 48 hours or more prop the frig’s doors open. Cook all of the meat thoroughy, ideally in a sauce with a preservative like BBQ, which contains a good amount of vinegar. Eat the well cooked meat within two days.

Meat can also be preserved under fat, like confit or chales, but since most of us don’t have tubs of lard or duck fat lying around it’s not very practical. I maintain cooked chorizo (it’s loaded with vinegar) for up to a week by frying it dry, spreading it on a plate and covering it loosely with a cloth napkin. But, don’t be deceived by processed meats, ham, hot dogs, lunchmeat, though full of preservatives they only keep overnight. I think it’s because they contain a lot of water. Though if you fry ham or bacon dry they keep for days.

If you find yourself in a really harry situation, meat can also be ‘dry cured’ by slicing thinly, rubbing liberally with salt and hanging it in the smoke of a consistent fire, which you might have if you were also without gas and had to set up a kitchen in your backyard. This is an excellent way to preserve fish and rattlesnake. But hopefully things won’t get that crazy… that you’re eating rattlesnake in your backyard survival camp. Though it does make a fine taco.

Step Three:
Cheese can be kept for many days, on a plate covered with, appropriately, cheese cloth. Turn it daily and transfer to a clean plate. It’s more inclined to dry out than mold, and is still quite edible. If you have a large amount of butter, heat it gently and skim off the milk fat solids that rise to the top. The clarified butter will keep at least two weeks if well cleaned.
Eggs do not require refrigeration. If they’re fertile you’ll get some blood spots if not eaten within a week. It doesn’t hurt you, but the texture is nasty.

Step Four:
Eat vegetables in the order in which they will keep, surprisingly carrots are only good for two days, whereas iceberg lettuce wrapped in a cloth will keep for a week. It’s better to wash vegetables when you’re going to eat them; residual moisture causes more rapid spoilage.
Vegetables that keep well: potatoes, tomatoes, onions, peppers of all ilk, cauliflower, squashes, both summer and winter. Veggies that won’t go the distance: broccoli turns yellow in one day, carrots, celery, leaf lettuces, except chard which keeps for 4 days if the stems are placed in water, whereas kale and mustard greens turn yellow in two days.

A pot of beans can be maintained by boiling every time they’re touched. Be careful to keep the beans fully submerged. Don’t put the lid on until they’re cool, because even a drip of condensation breaking the water’s surface will turn them.

Boiled milk will keep for two days with this process as well. Turned milk makes good biscuits and happy pets.

And finally, Bailey’s Irish Cream does not require refrigeration after opening, is excellent in coffee, and is soothing when facing another day without your refrigerator.

Now you’re set for power outages, camping trips and natural disaster!
Probecho!
*This message has not been approved by the FDA.

What’s the longest you’ve ever gone without electricity? Which appliance did you find the most difficult to live without? 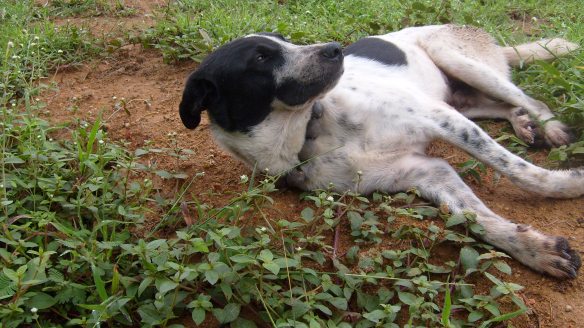 This is Sepillin. One of five dogs who live at the ranch where Felipe works. No, those are not shrunken skulls around his neck, they’re shrunken limes.

A few days ago Sepillin came down with a bone wrecking cough. It was so violent we worried he wouldn’t live through the next bout. Since farm dogs are of little value to their owners, Felipe knew it was unlikely he could convince his boss to treat Sepillin. When he asked for medicine, the man barked dismissively, “Ahhh, just put some limes on him.”

A coworker of Felipe’s who practices brujeria, confirmed this as the appropriate treatment. I rolled my eyes, mumbling, “cheapskate”, and other #%$& things and fled the scene. Felipe made Sepillin a lime collar.

When I returned the next day…Sepillin’s cough was gone! This is truly the most remarkable folk remedy I’ve been witness to. The dog was so ill I don’t think it’s possible that anything other than the limes could have affected his speedy recovery. Three days later he’s still fine, Felipe will remove the collar tomorrow.  This remedy definitely qualifies as very simple, very easy and VERY GOOD. He’s such a goodboy. 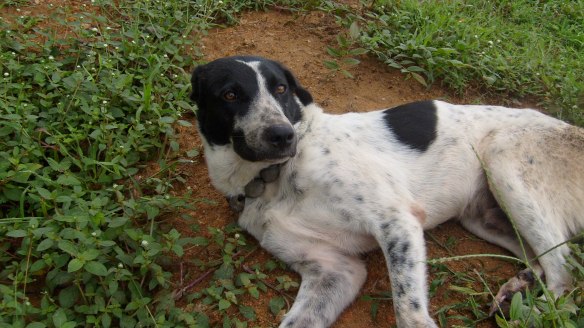 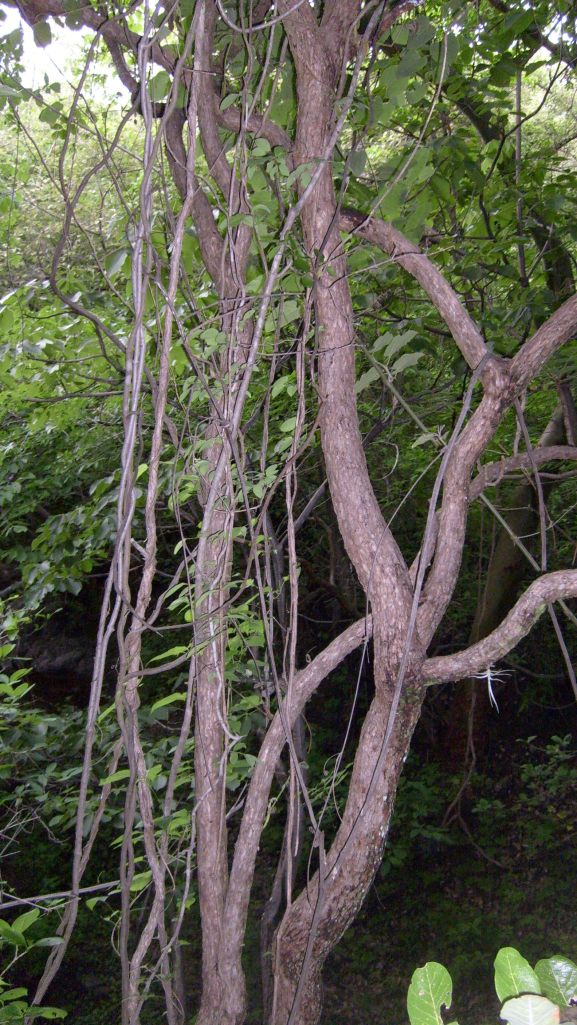 This is a taclate tree. It looks benign, no thorns, it’s not statuesque, but it is the perpetrator of an itchy, painful rash for those who are allergic to it. Like Felipe.

Felipe is of the same, avoid the doctor at all cost mindset as I am, and he loves to try folk remedies , so as usual he went to his mother for advice about this malady.

First, she said, make a paste of wood ashes and water, cake this on your rash and then peel it off and make tamales from the paste. 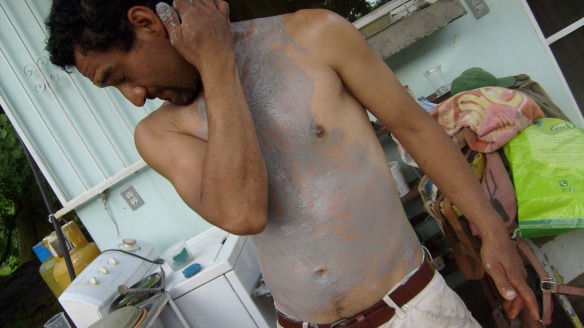 Keep in mind that lye is made of wood ash, so the paste burned and blistered Felipe’s already irritated skin. But he endured the ordeal to test the remedy, the hope of relief and to avoid a doctor visit.

Then, she told him, throw the tamales at the tree, try to make them stick, and swear at it! “Hijo de tu puta madre, dejame en paz desgracaido.” 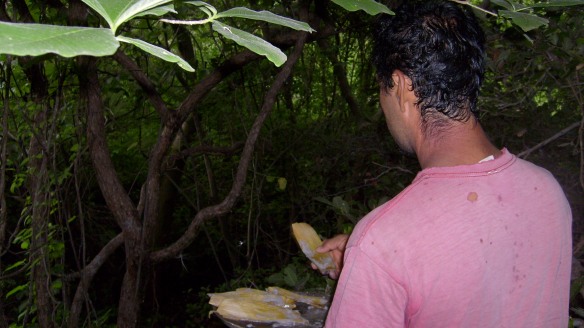 Coincidently, he had an opportunity to try another folk remedy within an hour of the tamale throw. Stung by a huge pissed off scorpion, he did as suggested to him by his friend the Brujo— tourniquet the limb and down generous amounts coffee and mezcal.

Within the hour we were on the way to the medico, the poison racing into his respiratory system, his fingers turning blue.

When asked about the rash, the doctor said it was a common ailment, but that Felipe couldn’t be treated for a couple of days because of the scorpion sting. He looked forward to some improvement from the folk remedy. 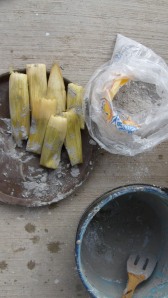 I’m afraid not. Except for the areas that were burned to numbness by the lye(maybe that was the cure?)  he continued to itch, and so spent the next two days recovering from the sting with the rash as a side dish of misery.

Perhaps our recent mishaps with self-healing will inspire a bit more modern thinking in us with our next health concern.

I don’t know though, I am pretty anxious to try the remedy for sties: hold a bowl over your eye and have someone throw pebbles at it while swearing at the sty and the mal aire (bad juju) that brought it to you. 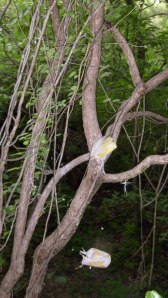 I’m fascinated by the concept of profanity and mock violence as cure, and have yet to unravel the significance of ashes and tamales.  Any ideas?

Despite all of my finer sensibilities, I sometimes find myself described as cochino. This is a word that translates roughly as nasty, filthy, one that consorts with dogs or is pig like. It is the term mother’s use to shame children their when they pick their noses.

Now it is true, I do consort with dogs if consort means sleep with, kiss, lie down with, that doesn’t sound so good, but who in the culture I am from, the United States that is, would consider this outside the realm of acceptable behavior? But in La Tigra, dogs are considered filthy animals, which are not allowed in the house, let alone your bed. 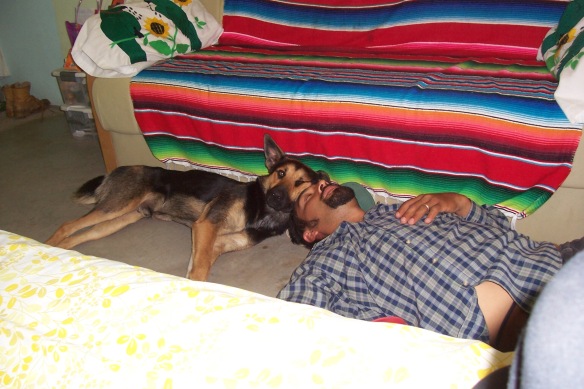 I am the only one in my ranchito (little town) that takes the pains to wash their dishes in hot water occasionally. Does this count for nothing? Nonetheless, I  also am the only person I know of that has had chinos and sarna; translate poultry mites and mange. It’s sort of hard to write, Dead Silence, but I imagining that is the reaction of readers right now, and then something like, MANGE?! Are you freaking kidding me! END_OF_DOCUMENT_TOKEN_TO_BE_REPLACED