Please consider the title of this post a warning, Gentle Reader. 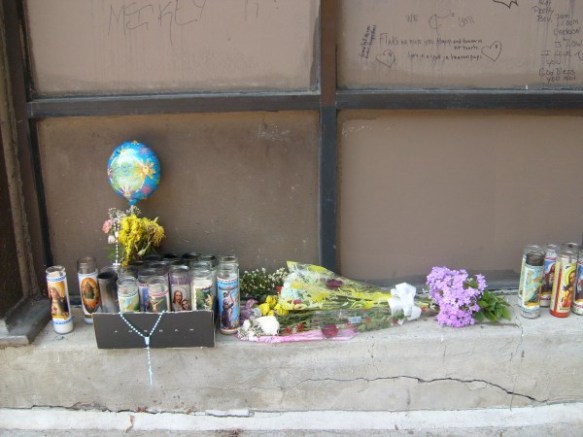 Recently, on our way home from Tehuixtla we drove by a burnt corpse. There was a police vehicle on the curb and two officers circling, what I now envision as, a still smoking body. “I think that was a burnt body,” I told Felipe.
“Yea… I thought that when we went by the first time…I was going to mention it but thought I’d wait.”
“Wait for what?”
“Until I was sure.”

We drove on since the police were there. Several minutes later I said, “Well, that was disturbing; I could definably have done without seeing a burning corpse today. Or any day for that matter.”

When we arrived in La Tigra Felipe told the group of people always assembled at his sister’s store, including several small children, what we’d seen. “Don’t talk about that in front of the babies!” I admonished him in English. His sister asked him if I’d yelled at him for talking about it in front of the kids. He nodded.

“Oh, don’t worry about that,” she said, “Mom was already here and told us all about it. They(Mom had been traveling with a truck full of people including several children) got out to look it. She said he was still wearing his tennis shoes.” I’d noticed that too, one white tennis shoe.

I’ve seen violence. I lived in a Chicago, Latin King ruled neighborhood for a decade. My daily walk to work during those years included passing by scores of street shrines where teenagers had died on the sidewalks.

A burnt body is different.

You may imagine it has an unreal quality. It does not. Not even in passing, through a moving car window. Though I can’t say the actuality of it provoked a reasonable response: perhaps a scream, or some tears. Fear. Fear seems appropriate. But I experienced none of these.

My reaction was almost clinical. I wondered, why trouble to burn a body left so close so close to the road? Obviously, it was meant to be found. I thought of the position: supine, limbs extended at his sides– no struggle, he must have been dead when they burned him. The large charred circle around the body indicated the fire had taken place there. Desecration, I speculated, the body was burned as an insult, and a warning I imagined. I was disturbed by the perpetrator’s impudence: standing ten feet from the road, setting a body alight. Since moving to Mexico I’ve become adept at reading tracks , seeing symbols , and interpreting the inexplicable . Usually they’re not as gruesome as these. Still, my inclination to analyze rather than agonize concerned me.

I considered the truck full of onlookers. Would we have gone to look if the police hadn’t been there? Possibly, to report it. But that wasn’t the observer’s purpose; they wanted to see it. Felipe claimed it was normal behavior. “They’d probably never seen a burnt body.”

“One would hope not, Felipe.” I retorted.

This is when the situation started to feel unreal, and I thought of Joan Didion’s observation , We live entirely, especially if we are writers, by the imposition of a narrative line on disparate images. I struggled with my account of people hopping out of the back of a truck, kids in tow, walking up to a burnt body…

My brother- in- found two bodies on the road about a year ago, one alive, one dead. Small business owners in our area are closing their shops to avoid paying the cartel tributes. A few weeks ago a friend of mine was beaten, in our tiny town, because his marijuana hadn’t been purchased from the local cartel approved provider.

I wish I had a wise or moving statement about these occurrences, or could justify writing about it with a plea to legalize drugs…or promote peace, but I can no longer reconcile my naiveté and my cynicism.
To bear witness is the best I can do.

I recite, my poem, Home, Away from Home. My response to violence.