I have failed more since living in Mexico than in the rest of my life put together. Good examples; my struggling garden and abysmal Spanish. It is, however, making a living that is by far the hardest part. If you consider that we’ve lived without running water, a toilet, and went for almost a year with no electricity, you have an idea of how difficult it is for the average person to make money in Mexico. The evidence was certainly clear prior to our arrival. This is a photo of our first bathing facility. 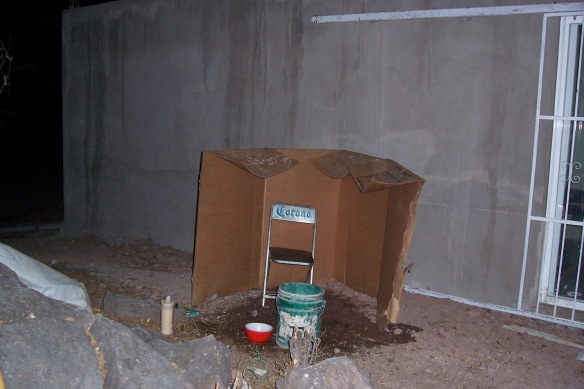 Felipe left Mexico for the U.S. at 18 and lived there illegally for 12 years in hope of a better life. Of his friends and family,  nearly 75% of have  risked their lives for a more prosperous future in the United States. We all know that thousands of Latin Americans (an estimated 350,000 Mexicans) a year cross the border illegally. As it now costs $7,000 to pay a coyote (runner) to deliver you across the U.S. border safely, (Felipe’s trip 18 years ago required three attempts) it is a measure of the desperation for decent pay and reasonable work.

I will tell what I know to be the truth about this situation.

Why the desperation? Though minimum wage in Morelos is only 75 pesos a day, about seven dollars, the average rate of pay  is 150 pesos(about 13$) for  10 hours a day, six days a week to make the average weekly income 900 pesos, approximately $80.  If you are fortunate enough to find work. Steady work is especially scarce.

This is an idea of what basic essentials costs here:

It is not difficult to see it’s not possible to live on 900 pesos a week when the average tortilla consumption, the greater portion of most people’s diets, is almost a third of the weekly income. With the exception of rent, things cost the about the same as they do in the U.S., although most luxury items cost more and are of lower quality. Products like coffee, technology, and shampoo are the kinds of things I bring back from the US for this reason.

Although Felipe has undertaken every form of work available, (and manufactured numerous others from his creative and resourceful mind) were it not for the small payment (500 pesos a week, $48) on an investment we sold, and the fact that we have no bills, we would be forced to return. Soon this payment will end, and we each have projects that we hope will succeed in filling the gap. I have recently finished writing a memoir about our experiences in Mexico, and Felipe is raising pigs.

This is Felipe’s sow, Empire. He bartered for her. He and a neighbor made mescal in a homemade still, and he paid with his product, mescal’s market value is solid in our community.  With Empire, he plans to build his pork enterprise. As the photograph reveals, she rose to the challenge by birthing 13 healthy piglets. 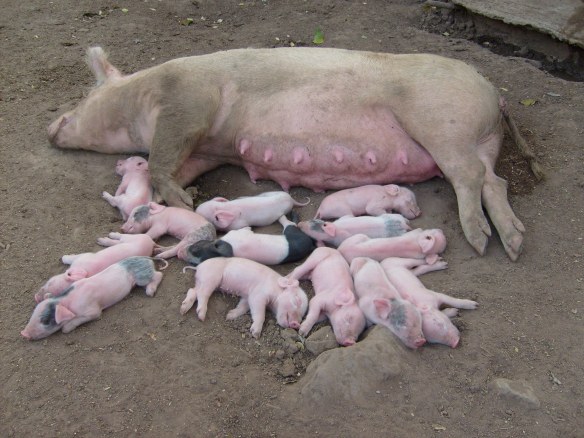 Raising pigs requires much more labor than feeding them twice a day. Felipe has spent a month of hours researching their health and nutritional needs, and, as seems to be the case with our animals, there is frequently drama. Pigs are high-strung creatures. When the first rains came, the piglets got wet, muddy and cold, they responded by screaming, which agitated Empire so much she started attacking them. Felipe spent a drenched afternoon, catching, cleaning and warming piglets, as he cooed to his overwrought sow that everything was okay. I think she has a crush on him. She isn’t interested in other humans, unless you have papaya. Perhaps it is because he massaged her belly to assist her birthing rather than giving her an injection to speed up labor, which is the standard practice. Felipe avoids any unnecessary medication.

This week he castrated his boars. Male pigs must be castrated or their flesh is gamey. I assisted him with his first litter — it was horrific. It was the most brutal act I have ever committed. It was easier on everyone this time because his friend Lolo replaced me as assistant. Incredibly, they all ran around that very night, as if nothing had happened.

Felipe has an ambitious, zero-waste vision for his pig empire that involves using their waste to make compost to grow the pigs’ green food. He will also raise fish to supply the protein and calcium needs of the pigs – the pricier portion of their diet. His production goal is to make and sell high-end, cured pork products (i.e. prosciutto, bacon, and a variety of specialty sausages), thereby increasing his profit margin and alleviating the need to send his animals to market. A practice neither of us are comfortable with. The only products of these kind are low quality and high-priced, or the ubiquitous, locally made longaniza, which anyone that has ever had a decent hot dog or bratwurst eventually tires of. Based on this fact and the experience of ordering a charcuterie platter in a fine dining establishment in Tequesquitengo and being served raw turkey hotdogs with my serrano ham and saltines, we feel the market is wide open.

In terms of making a living in Mexico I am afraid I must say it is the antithesis of very simple, or very easy, but the life at least is very good.

Do you have any questions about what it is like to live as an undocumented worker in the U.S., or why he decided to return to Mexico to live knowing how difficult it would be? Felipe would be happy to tell you about his experience there and his reasons for leaving. You may find his responses surprising.