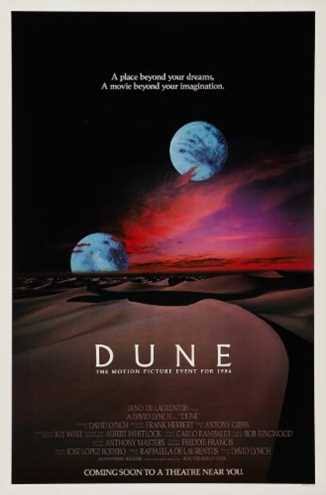 A film that lives up to its tagline.

I watched it last night on youtube. It’s weird and wonderful. I’m a David Lynch fan; it was fascinating to see the beginnings of his big-screen aesthetic in Dune. In my previous post, I said the film is dated, that’s not accurate. It’s a mix of genres that I didn’t understand when I saw it as a youngun: vintage sci-fi, spaghetti western( the tearing page breaks), and inverse graphic novel(the inner narratives, imagine them in dialogue bubbles). Considering the technology available at the time, It’s brilliant.  It has its hoaky moments, but they feel deliberate. And, in almost the same amount of time, he managed to tell us the whole story. There are some broad swathes of narration and a bit of creative license to achieve this, but at least I don’t feel like I’m being set up to buy another ticket.

This movie was not well received. It was cut up and released in different versions, some of which Lynch refused to have his name on.

Considering Dune has been deemed unadaptable to screen, I think Lynch did a great job. Possibly better than we will ever know; he objected to his lack of control over the final cut.

While researching this post I came upon this! Jodorowsky’s Dune

It’s a documentary on a Dune that was never made. It will be the feature film this evening. Then I will extract myself from this wormhole and get back to work, read some books…tomorrow.