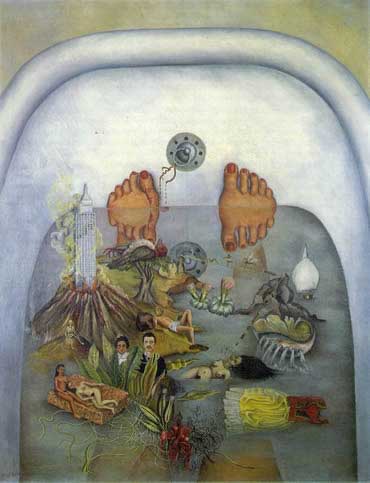 What the Water Gave Me, Frida Kahlo

I lie in the bath. The water is hot and I am grateful. I’ve lived without hot water so many years I tear up when slide into a hot bath.

The faucet drips. It falls into my bath, I try to feel that’s okay. The water will be used, enough water to serve two households on the other side of the world for an entire day, just for my pleasure.

The building’s water is paid for by the landlord.  He isn’t responsive to tenant concerns. I try not to think about this. It diminishes the experience and my choice. It doesn’t honor the water I’m submerged in.  I start to feel a little crazy. Why can’t I enjoy a bath without  sorrow for people who must risk death for a drink of contaminated water?

Other’s responses to times I was unable to keep my mouth shut surface. “If I have the ability to enjoy comforts why shouldn’t I?” “Denying yourself doesn’t change anything.” “You cannot save the world.”

Day 19 in the United States of America

Once I complained to a friend

“They’re always in the way

“Yes, but what of the view

That friend was Cheryl Larsen , and it’s a perfect example of the kind of impact she’s made in my life. Cheryl was the first person to look at my art and say, “that’s cool” not, “what’s that?” She influenced my eye and methods by introducing me to the art of Tina Mondatti, Frida Kahlo and Cindy Sherman. She gave me Jon Berger’s Ways of Seeing, and Susan Sontag’s Against Interpretation, and she’s held my hand, assuaged my fears, and been my cheerleader for the last year as I learned my way around VSVEVG.  I love and thank you Cheryl.

VSVEVG was one year old on February twenty fourth, boasting eighty-eight posts, hundreds of comments, likes, shares  and follows. I must say, it really has been just wonderful.  The amount of support I have received has awed and humbled me.

I’ll be writing another year of VSVEVG with a view from the top. read the rest of my poem Cahoots here

To commemorate this anniversary I am reposting a revised Dinner and a Swat team, an early post, I still consider one of the best and most relevant.