Entry four of four: I would like to introduce you to my husband…

When the rains came the well filled with mud from the torrent of the swollen creek. We hadn’t built a sufficient retaining wall around it. It would have to be cleaned, Felipe would need help and I was it. We pumped as much of the water from the top as we could without filling the pump with mud. There was a meter and a half of sludge in the bottom, Felipe lowered himself in and started the process of removing the sludge, one bucket at a time. 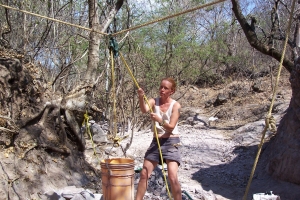 He attached the bucket to a rope and pulley; I heaved it out and filled the wheel barrel. While Felipe refilled I walked the mud over to the shore. It was the worst and most difficult work I have ever done. It took two days, five hours a day. The mud in the well smelled like rotten fish and was black, gritty and slimy. I stood barefoot in the creek for hours; I couldn’t wear shoes because they were immediately sucked of by the mud. The wheel barrel was so heavy I could barely move it, I repeatedly slipped and stepped on sharp rocks, and thorns. I was covered in stinky, slimy mud that the bugs were crazy about, and was stung by wasps that got stuck in my gross coating. If I tried to shoo one from my face I got disgusting filth on my head. I became so waterlogged chunks of skin fell off my feet. END_OF_DOCUMENT_TOKEN_TO_BE_REPLACED

I think of talent as a gift you possess you have not worked for; like being able to talk backward, or having uncommonly good balance. I only have one. I love all foods. Everything. All fruits, vegetables, meats and grains and pretty much every preparation, though I certainly have preferences. I will eat anything that is actually food including live bugs and warm iguana blood. I have always been this way. My mother never had to threaten or cajole me to eat, she was forever chasing me away from raw hamburger, basically trying to stop me from eating things. I did have an aversion to cream of mushroom soup for a while because we were so poor everything we ate was en casserole. Now I think it tastes like childhood.

I was a waiter for many years and as most waiters are, I was obsessed with food and restaurant culture. I dined in some of the finest dinning rooms in the country, eating everything from foie gras foam to lavender infused lychee fruit. After all those extravagant meals I can say with assurance that my favorite food is beans. Of course I love every kind of bean and the thing that amazes me the most about them, other that their obvious health and fiscal benefits, is that every time I eat them I think, man these are so good! I also say this, and considering how often we eat them, it’s a testament to Felipe’s patience that he smiles and nods his head, rather that screaming,” I KNOW YOU LOVE BEANS ABBY! ”

What I have noticed during my trips to the US is that people eat beans only occasionally and mostly from cans. I have more than once visited a pantry and found the same bag of beans in it that I encountered six months prior. You know the one, mixed bean soup with the carcinogenic liquid smoke flavor packet.
So this is my Bean Manifesto, I hope to inspire anyone who reads it to eat beans at least three times a week. To buy said beans in bulk and to prepare them yourselves.