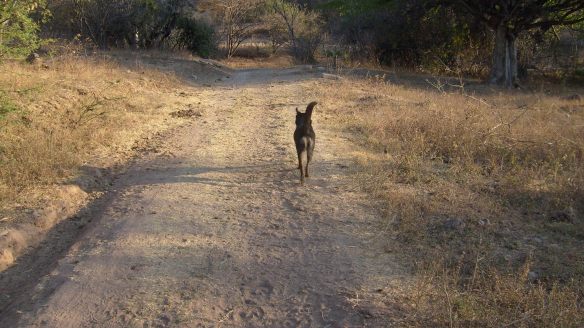 “In dark times, the eye begins to see.”

Shortly after I returned from the U.S., I set out with my dogs , Lilly and Moechi, on our favorite walk . The walk begins on a gravel thruway, turns into a farm road and ends in a mountain trail passable only on foot, or hoof. When I turned onto the trial I noticed Lilly wasn’t with us, I called her, and when she arrived she was shaking and foaming at the mouth. Somewhere in that remote and lovely landscape she’d found poison. She was dying.

I was memorizing Jane Hirshfield’s, For What Binds Us, as we walked.  I’ve had a very difficult time continuing with this poem, or even going for a walk since her death. But it is so appropriate, I wanted to share it. I admit I used a cheat sheet to make the video.

I’ve questioned my choice to allow my dogs to be free, since I’ve lost four in two years  to poison and disease.  I don’t know that the answer is sufficient or responsible, but, it’s because they are campo dogs. Freedom is their life.  I know, though not as safe, they are happier than the poor dogs I walked in the U.S. that spent hours in their crates every day.

Long ago, I decided my responsibility was to aid in the fulfillment of their daily lives, not the near impossible safeguarding of their future. After Elvis was implicated in the death of a calf and became a public enemy , I tried keeping him on a leash, watching him constantly if he wasn’t; I made him stay indoors at night (no one got a good night sleep). But it only took a rabbit sighting to send him deep into the woods if I wasn’t hyper-vigilant. Finally, I realized I could not watch my dogs all the time, and that even if I had a fenced in yard someone could and likely would throw poison over the fence again someday ; I could not protect them. So I let them live their lives, until it kills them.

I can imagine the look Lilly would have given me if I had tried to keep her on a lease for our walks. I’m sure she would have sat down in the dirt and refused to accompany me in such a degrading position, she was very good at getting her point across.

I will return when I can feel that anything is very simple, very easy, or very good again.