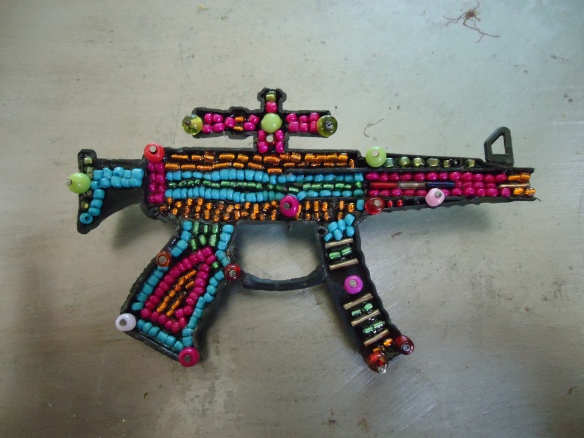 Accessory a brooch by Abby Smith

In my early years as an artist I felt the need to justify…to defend the materials, explain the concepts, vindicate a loaded image. I mean who thinks of jewelry as art right? Especially jewelry made of garbage.
It disturbed me if I didn’t fully understand what I was presenting, and that sometimes I created an object with controversial intent. It’s comical in retrospect. I was a very mannerly artist indeed.
Likewise, I tried to write comprehensible poetry. If I wrote a line I didn’t understand, a word that arrived as a sound, something of questionable ilk, I removed it. How sad, I literally erased the moments of breakthrough out of fear I couldn’t explain myself. Where I got the notion that art should or could be graspable, defendable, I don’t know. I believed in what kills art; but I let that go, long ago. When I stopped explaining, I was more inspired, and more open to synchronicity in my art and life. Accessory is a good example.
I was thrilled when I found the little broken gun on a filthy Cuernavaca curb. I could not help but wonder what goes through the mind of a person who walks up to a sales clerk and hands them money for a toy machine gun. From the size of the gun it appears to be made for a five or six year old hand. I know boys (mostly) love guns, some claim this is genetic. And I’m seldom disturbed by other sorts of toy weaponry, cowboy revolvers for instance. But something about a replica of an AK47, the world’s most popular assault rifle, as Nicolas Cage puts it in God of War, placed in the hand of a six year old as a gift, perhaps even a reward, shocked me, and I’m not easily shocked.
It was obvious the gun would become a brooch, my favorite form. I envisioned it crustily sparkling with beads in Day of the Dead colors before I my walk ended. Then the title came to mind: Accessory…I was delighted by the double entandre: adornment and complicity.
Next, the search for the beads. A few months later, I was in the market in Tepoztlan and there was a vendor with sheets spread out, covered in piles of beads. It was the first time I’d seen beads for sale in a Mexican Market. One sheet was piled high with small bag of seed beads, exactly what I needed, at 3 pesos a bag, just my price range. I chose four bags, one with mixed beads I hoped would have sufficient variety to accent the base colors I’d chosen.
In the mixed bag I found six gold bugle beads: bullets– and one red, one white and one blue bugle bead to make a solid allusion down the barrel of my piece. In the whole bag there were only these nine bugle beads. That is the everyday magic of art.
Fearlessly, unapologetically, open your heart to its intentions and it will provide.