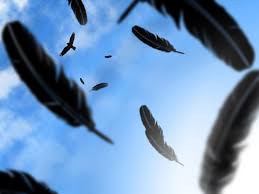 Poetry is many things: the meaning within the words, the meaning below, or above. A poem is an object, a form, with negative space and silence as important as the black marks and the telepathy that occurs when we interpret them.

Poetry is breath, the only thing we cannot survive more than a few minutes without. And sound: one of life’s grand gifts.

Something I have come to love during this project is the way a poem feels in my mouth, the way it tastes. That is why, in part, today’s poem is important to me.

I had a mystical encounter with an owl, considering I believe  a washer winked at me this is not a surprising revelation.

Once upon a time, in a place …..Let’s say, I was young, and I was a waiter that made between 100 and 2oo hundred dollars cash a night in 1987. I paid no taxes on tips and had no responsibilities in my life outside of a job, rent, and my cat. The money I made was more than plenty.

But one night I made less when I felt I deserved more.  As I walked home  thru the Uof I campus I argued in my head with the man that didn’t pay me what I was worthy of. I bitched to myself about the 100, rather than the 200 dollars in my pocket. I tromped through the snow glaring at my feet as I huffed in the cold. My body was anger. When I crossed Linn Street I came up against the big church there for which I had, and still have no particular feeling.  In the flat cropped hedges that surround it sat an enormous owl. When I saw the owl, my mind immediately heard this admonishment,

“Never accept the worry and the angry of money into your body.”

It spoke to me. I heard it. Period.  And that voice changed me.

I worked as a waiter for a long time after that , and I got a lot of bad tips, but never again did I relate money to my personal value, never again did  become the angry the owl  had warned against.

This was a great gift, from whom, I don’t know.  The owl sat outside a church, so perhaps the father god? It was an owl, the emblem of goddess wisdom, could have been the mother god. Or was it my own divinity, my consciousness, coming to me in exactly the guise I needed, to hear the message?  Ultimately, it doesn’t matter.

I chose to have the owl of Athena tattooed on my shoulder as a reminder of this epiphany  life  granted me because I  am entertained and consoled by the foibles and insanity of the Greek pantheon, but what I am choosing is metaphor– depth, and the recognition and celebration of our inability to absolutely know. I believe this is the great lesson.  I learned it from an Owl.

The Master keeps her mind
always at one with the Tao;
that is what gives her her radiance.

The Tao is ungraspable.
How can her mind be at one with it?
Because she doesn’t cling to ideas.

Has a life changing epiphany ever come to you from an unusual source?