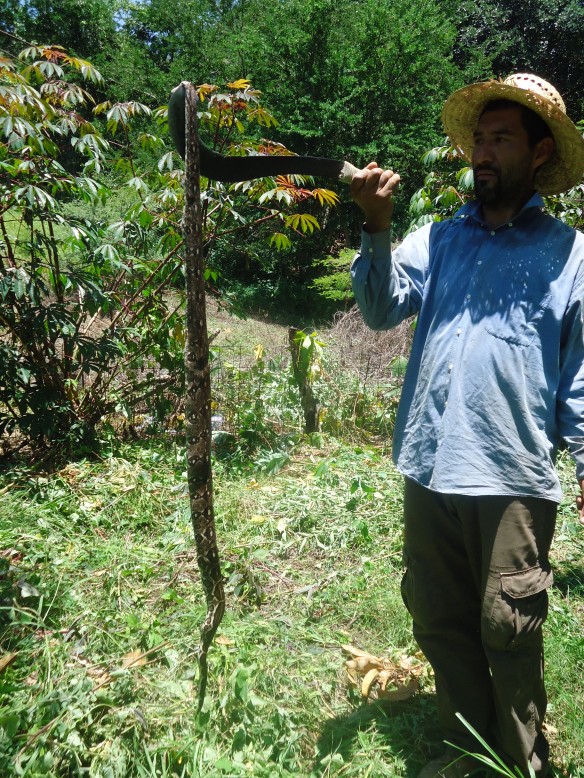 Felipe and a constrictor living 15 meters form our house.

Felipe decided to help me get caught up in the garden. I’ve fallen behind during my recovery. There were a few corners that I haven’t been to in quite some time apparently. This masaquata(anaconda) had taken up residence under my mulberry tree, fifteen meters from the house. Felipe disturbed its sleep and it came at him hissing. He said it scared him. I don’t need a whole hand to count the times Felipe has told me something scared him.
Perhaps you are wondering why he felt the need to kill it though.
Masaquatas are not poisonous, but they do have a nasty bite. They are constrictors and this one could definitely have made a meal of Chupa and Chico(her piglet buddy) who spend much of their afternoons napping in the garden. I also plan to house ducks in my garden one day, so, I’m sorry, but this predator so close to the house was not welcome. Had it been a bull snake, it would have been welcome to stay. We inhabit about an 1/8th of an acre of out of the Piedra Rahada’s 17, the rest is available to wildlife.
No, I did not skin it or eat it. I’ve never butchered a snake, though I’m sure I could have figured it out, snake butchering was too steep  a learning curve for the day. Rest assured there are a million other hungry organisms to make use of him. 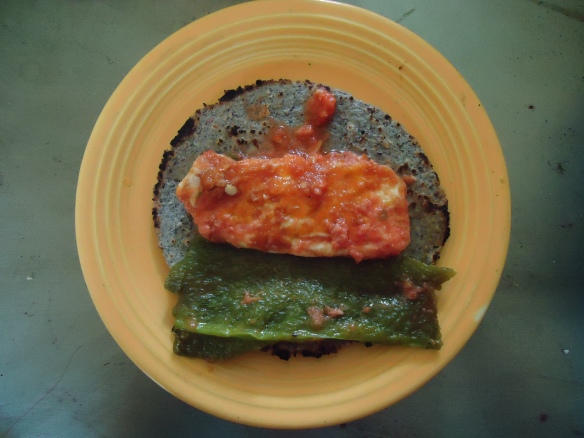 This is the last in my series of vegetarian tacos . As usual I had to tweak the recipe. Generally chili poblano is charred and cut into strips, for tacos. Sometimes bathed in crema(Méxican sour cream)* for rajas in crema, or, a la Méxicana, with tomato and onion, with the poblano as the chili portion of this basic recipe. For the full blown rellenos taco, the chili is stuffed with cheese and batter fried, then wrapped in a tortilla. I am not afraid of fat, but a deep fat fried anything in a tortilla is a little heavy even for me. So because I love rellenos and portable food, I devised this slightly lighter version.
Tacos Rellenos de Queso Frito, con Salsa Ranchero
Charred, and peeled chili poblano, cut in half. Each chili will make two tacos.
Queso cincho , ar any cheese that fries well; kasseri , provolone are good choices.
Vegetable oil
Tortillas
Heat the oil, and fry the cheese until brown outside and creamy inside, warm the chili in the pan as you do this. Place the cheese in the chili and the chili in the tortilla. Eat immediately, fried cheese gets tough when it cools. Dip in salsa ranchera.
Salsa Ranchera
This recipe comes from, you guessed it, Diana Kennedy’s, The Essential Cuisines of Méxican! She mentions the debate about whether or not to broil the tomatoes; I’m with her, I prefer them broiled. This salsa is standard with Huevos Rancheros, Queso Flameado and Chilies Rellenos. It’s a good standard recipe to have in ones repertoire. It makes about a cup.
One pound roma tomatoes broiled until some of the skin is blackened
4 serrano chilies charred, I do this in a pan with oil, again to blacken the skin
1 clove garlic roughly chopped
2 Tbles vegetable oil
2 Tbles finely chopped white onion
½ tsp salt, or to taste
Blend the tomatoes, chilies and garlic until fairly smooth.
Heat the oil and fry the onion gently without browning, until translucent. Add the blended ingredients and salt and cook over a fairly brisk heat for about five minutes, stirring and scrapping the bottom of the pan until the sauce is reduced a little and well-seasoned.
Probecho! 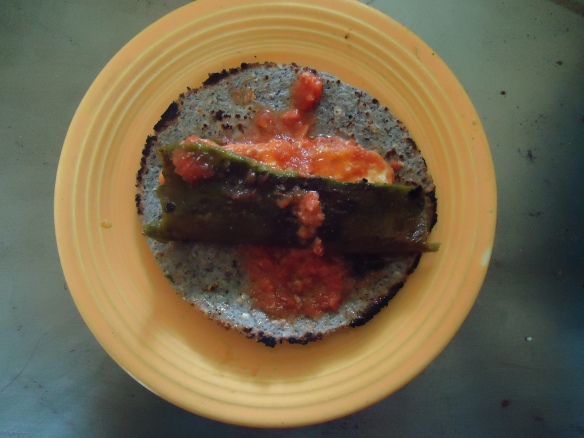 These are the links to the rest of my vegetarian taco recipes; in the case you missed one 
Tacos de Haba(fava vean)
Tacos de Nopal(cactus paddle)
Tacos de Hongo(mushroom)
Tacos Dorado(ricota)
Tacos de Papa (potato)

*I mention crema in several of these posts. You can buy Méxican style crema, but it’s overpriced. The most authentic way is to make it by adding 1 Tbles sour cream to 1 cup of unpasteurized heavy cream and let it sit in out for a couple of days. It’s pretty warm here so it doesn’t take mine more than a day usually, but be sure your crema is in a warm place, say near a pilot light. Then, pull the heavy top portion back and pour off any whey that may be at the bottom, add some salt and refrigerate.
Or, you can use regular sour cream, which is perfectly delicious. I hope you enjoyed my veggie taco series. Our next foray into the authentic cuisine of Morelos features– Chicharron! 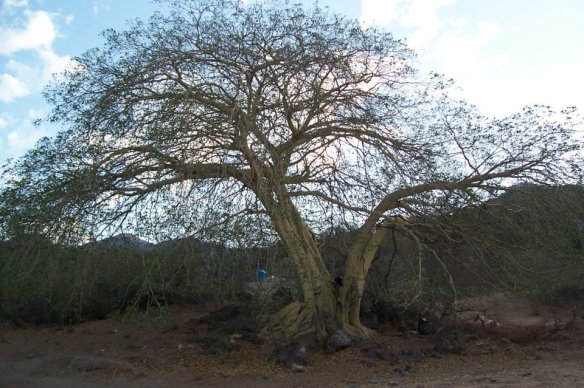 The Amate. If you look closely you can see our tiny house behind it, and Felipe sitting in the crotch, just to give you an idea of its size.

Almost thirty years ago, a friend gave this poem and told me, “This reminds me of you.” I have carried it all this time. I’ve tucked it into my journal, pinned it on corkboards, hung it in cubicles, magnated it to refrigerators. Now, at the half way point of my personal challenge to recite 52 poems in 2014, I will recite it for you. Never before has the poem meant so much to me. For I am finally, here under the amate in the palm of the Sierra Hualta, truly, in the center of all beauty, writing and reciting these poems. Imagine!

When I was a child
I played by myself in a
corner of the schoolyard
all alone.

I hated dolls, and I
hated games, animals were
not friendly and birds
flew away.

If anyone was looking
for me I hid behind a
tree and cried out “I am
an orphan.”

And here I am, the
center of all beauty!
writing these poem!
Imagine!

Thank you for listening.
What is your vision of the center of all beauty?

Jake can make a pillow out of anything.

I’ve known more death while living in Mexico than in the rest of my years combined. Since moving here, I’ve lost my Grandfather and Grandmother, my stepfather, my constant companion of 24 years, my cat Elizabeth, Elvis, numerous farm animals whose lives were my responsibility, and this week, my dog Jake.

Perhaps it’s because, as Octavio Paz claims, “one of the most notable characteristics of the Mexican is his willingness to contemplate horror.” How is it my losses relate to this statement? Because in Mexico, I cannot avoid death as I was before.
I once had two very old cats. One of them, Gordy, was euthanized due to declining health and my rationalization that he was suffering. But after his death, I knew it wasn’t true. He wasn’t in pain, he was dying, and I didn’t want to watch it because I loved him, and it hurt and scared me. I didn’t want to have to call in sick to work because my cat died, so I scheduled his death for my convenience and to avoid my own suffering.

When I moved to Mexico, I brought Elizabeth with me, determined to allow her her own death. The three days she faded away were excruciating for me. She was tranquil. Still, there were times I turned away from her I wish I had not.
When Elvis died, though it was a horrible death, I didn’t avoid one second of our last moments together. I fought to save him and failed. I held him as he bled his life away on me, I kissed him and told him how good he was, and he died with the sound of my calm, adoring voice in his ear. It was my most genuine Mexican, possibly my most human, moment to date.
There are some obvious reasons for this glut of death that haven’t anything to do with Mexico. I’m aging, and so are my loved ones, and death is an integral aspect of farm life. And yet, though it may be a poet’s perverse romanticism, it seems to me that in Mexico, death is more accepted as part of life.
Though I hope to someday experience Laurie Anderson’s explanation: “Death is a release of love” (perhaps at my own death), so far, this is what I’ve learned. Death touts regret but is about forgiveness. Death is helplessness. Forgiveness is the anecdote, acceptance the balm. In these moments when I tried and failed or was without recourse, I felt the futility of life completely and inexplicably —the splendor, and with that, I went on. 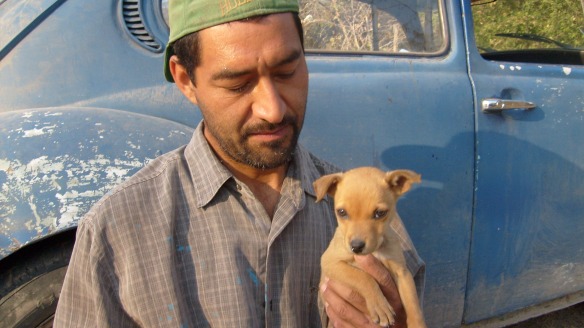 As is often the case, life follows its own purposes.
After Elvis’s death, I was determined not to get another dog until I could provide a safer home. Earlier this week, I came across a tiny, sick puppy abandoned in a garbage dump. It’s a common sight. Though I’m not proud of it, I’ve averted my eyes from hundreds of pathetic animals since moving here. But something about this puppy stopped me. She wriggled on her belly, blocking my passage, and I read in her eyes, You’re not really going to leave me here to die, are you? I picked her up, and was crawling with lice by the time we got home.
Felipe wasn’t thrilled to have another mouth to feed, and the rest of my animal companions looked at me disgustedly for days. I thought maybe I could entice my friend Larry to take her; he loves dogs and has a more generous heart than I can claim.
After a long struggle with cancer, Jake declined daily, requiring more and more care, causing deeper heartache. As I ministered to him, I applied treatments to the puppy for her parasites and a solid undercoat of scab. I resisted naming her.
We decided the day Jake could not rise to relieve himself would be the day he died. His distress grew with his immobility. Felipe had the horrible task of ending his suffering. There’s no scheduling a humane injection in our world. I’m immeasurably grateful to Felipe for his strength and courage. I doubt I’ll ever be so brave or unselfish.
He came home that night with a need to talk about the experience. I listened, overawed by his willingness to embrace life fully no matter the circumstance.
We finished our dinner, and the puppy scurried around the table, harassing Felipe’s cantankerous dog, Lilly. He laughed and said. “Why don’t we name her Jakeline.”

Goodbye, Jake, my miracle dog. Such a very, very good boy you are.