Entry two of four: I would like to introduce you to my husband…

They were all impressed with the water they could sense on our land. They started to chip away at the stone Guerillmo had chosen as the portal of our well, and to tell stories. I was sorry I could not understand better, my Spanish was quite rudimentary at the time. I could tell by the inflection and dynamics of their speech they were experts of oral tradition. This is some of the wisdom I gleaned. 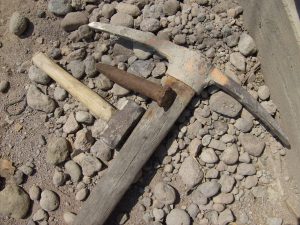 Don G. was certain that within a meter of digging thru solid rock it would turn to sand, the work would get easier, faster and would be worth their effort. He was right about the water but he was wrong about the rock. After two weeks of digging thru solid stone they gave up on our well. It wasn’t cost effective because they were paid by the meter, and the going was too slow. Don G disappeared, a couple of the men on his crew continued to come until they had dug three meters, where they stopped though had been paid to dig another meter. We had water but it was not enough to make it through the dry season.