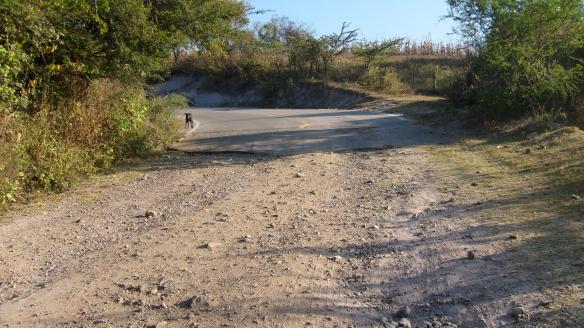 The End of the Road

Purportedly, when Daniel Boone saw the wisp of a neighbor’s campfire on a distant mountain he knew it was time to move on, the neighborhood was too crowded. For this, Mr. Bryson questions his intelligence.

Generally, Bryson and I are in accord. Perhaps it’s because we are both from Des Moines. But more likely, it’s my idol worship.  If only I could have written Lost Continent, a book I’ve read three times and still laugh so hard I disturb Felipe’s sleep.  Anyway, I found myself siding with the maligned Mr. Boone recently, when to my horror and amusement, I found La Tigra can now be located on Google maps.

I understand Boone’s concern, especially since the wilderness I live in is not as vast as the U.S. west was in Boone’s day. Because living in the middle of nowhere requires fortitude: I wash my clothes by hand on a washboard, I don’t have a refrigerator, hot water, television, internet, or a reliable phone, and the change of seasons is marked by which bug I’m tormented by. Still it’s worth it, for the beauty and the solitude.

But the possibility of also enduring nearby people and their 24 hour polka music at Spinal Tap volume, their dogs that have never once been discouraged from barking, their roosters, roaming animals and inquisitive children, would I am afraid, make life here untenable. Thus, a place on google maps is like a bonfire on the horizon. Though I had to laugh when recently a gentleman used the map to visit us and ended up taking a farm road I hesitate to ride my horse on.

Google also tell us that La Tigra’s population is 310. I like this though I know it’s inaccurate, I’d guess around 500. When I brought up the subject with family most were slightly offended, “No, we are much bigger than that since the road was finished.” We were five miles from pavement when we moved to La Tigra. Three years ago the road was paved within 50 meters of our driveway.

It’s true, the paved road (that google maps doesn’t indicate as the best route) has brought commerce and work and new La Tigrians. It saves our tires and cuts the time of our trips to civilization in half. But I knew it was the harbinger of a future move higher up the mountain. We have another piece of land up there, miles from a town, hundreds of meters from any neighbor and they only live there during planting season.

Of course people think this is crazy, “Why would you want to be more isolated, farther from people and services?”  I agree it’s a little crazy, but only because we can’t move higher forever.  Still, I imagine we will live in google’s wake until there are no more uncharted roads, and then I want to move to New York City, because if I must have neighbors, I also want libraries and museums, and Thai food.

*This quote is taken from Bryson’s, Wide Open Spaces, in, I’m a Stranger Here Myself. It’s a brilliant, scathing essay on U.S. attitudes toward immigration. Read him and weep with laughter, or envy if you’re like me.